Skip to main content Skip to search
You are here

Tummo is a Tibetan word. Literally, it means “inner fire” and it refers to the hidden sacred power in every human: the Kundalini. The Kundalini is crucial for your spiritual growth, because only the Kundalini can help unite the practitioner (micro cosmos) with the Oneness (macro oneness). Unfortunately, the Kundalini in most humans is dormant. The awakening process of the Kundalini normally takes many years and Kundalini awakening can be dangerous.

Reiki TUMMO™ Level 1 attunement opens the whole sushumna (main energy channel in the spine) from the base all the way up to the crown chakra (a process that would take decades using traditional techniques). Hence, should there be an excessive pressure from the Kundalini energy within your body, the pressure will be easily released through your sushumna. The opening and cleansing of your sushumna will also improve your health and your energy channeling ability. During Reiki TUMMO™ level 2 attunement your Kundalini is awakened instantly and safely.

The combined and synchronized Reiki and Kundalini energy will result in an amazingly rapid and thorough cleansing on you. Even a senior Reiki Master from other traditions can usually feel their progress after the opening of the whole sushumna in Level 1 attunement.

Every level of attunements in Reiki TUMMO™ has different goals with regard to the Kundalini awakening processes:

For some of you, this sounds too good to be true. Again, we invite you to use your Inner Heart, the all-knowing part of you to realize the truth. In fact the continuous flow of Kundalini energy bursting out of your crown chakra after Reiki TUMMO™level 2 attunement can be easily detected or scanned by anyone with sensitive enough palm chakra as Kundalini energy is coarser then Reiki energy in nature. During Reiki TUMMO™ level 2 workshop every participant will have a chance to be scanned by others to help him/her understand that his/her Kundalini is indeed awakened and flowing already.

As every major chakra may get dirty from different negative emotions, every body layer can also get dirty from different negative emotions. Spiritually speaking we have been accumulating different kind of negativities from life to life that make our heart dirty as well as the energy layers outside our heart. To open our heart bigger for True Source, we need to cleanse all negativities layers around our heart. Our spiritual heart start opening from the center of our chest and need to open to all directions bigger, that is why the whole 7 body layers of ours that initially envelope our heart and are not clean need to be cleansed as well.

The picture below illustrate the human 7 body layers in relation to the opening the heart process. 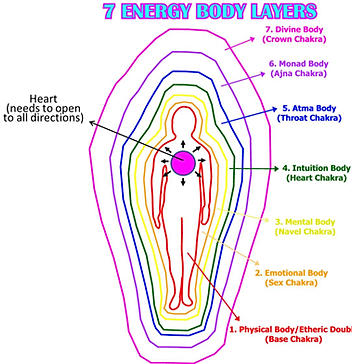 Why Kundalini Awakening is Safe in Reiki TUMMO™?

Some of you who have read or known about Kundalini may have heard about the problems that Kundalini can cause. These problems are often referred to as the Kundalini Syndrome.

First, it is important to know why Kundalini awakening may be dangerous. This is because the Kundalini is a huge and unlimited power. While it lies dormant, there is a shell holding all of this power within (see the picture of Kundalini structure in the section of Kundalini). The conventional way of awakening the Kundalini is by stimulating the Kundalini to produce enough energy so that the shell can be broken. The Kundalini energy will also be able to open the nearest knot of the chakra, Brahma Knot, the knot of the base chakra. However, there is still no passage for the energy to go through along the sushumna because each chakra along the sushumna has a knot blocking the sushumna. See the picture below of Ordinary Kundalini Awakening.

Meanwhile, the awakened Kundalini energy is released continuously. As there is no passage for the energy to be released, the amount of energy within the body builds up creating stronger and stronger pressure, pushing everywhere. When the Kundalini energy presses against the stomach, for example, one will get stomach problems, if it presses against the chest it creates chest problems, if it presses in the head area, it creates continuous headache and so forth. When the person tries to get a medical check up, the doctor will find nothing wrong and the person is considered healthy. This is confusing for many people because the person is really experiencing something wrong in their body yet the doctor may find nothing wrong medically. These symptoms were created by high energy pressure of awakened Kundalini energy being trapped within the 7 body layers system without a proper way out.

The ordinary Kundalini awakening can also happen in ordinary people in daily life due to an accident. Remember every one has Kundalini regardless he/she believe it or not because we are all created equal with the same spiritual tools called non-physical body layer system including chakras, energy channels and Kundalini. So, someone may fall down and break his/her tailbone that is where the Brahma knot is located, and by accident release the Kundalini energy without any preparation. This will create Kundalini syndrome also as the Kundalini energy has been released anyway even if the broken tailbone has been fixed medically. A person with this accident usually experiences many unpleasant sensations along their spine during his/her life due to trapped Kundalini energy within his/her sushumna within his/her spine. The fix is actually by opening the sushumna channel thoroughly to release the trapped Kundalini energy. Reiki TUMMO™ attunement does that from level 1.

The other way of awakening Kundalini is by getting help from others. This technique is known as Shaktipat (energy transfer) where a teacher/helper transfers some energy to help awaken others Kundalini. Not every one is capable of doing this technique. The results of Shaktipat technique depends on which channel is being used to release Kundalini energy. Some Shaktipat techniques awaken Kundalini energy through the secondary channel of Ida or Pingala. Even though this technique successfully releases Kundalini energy, it misses the important benefit of Kundalini in cleansing the roots of major chakras as the roots of major chakras are all located in the main energy channel, Sushumna, not in the secondary channels. It will takes more time before finally the Kundalini energy is strong enough and ready to open the main channel. See the picture below of 'Ordinary Shaktipat Through Ida/Pingala'.

Another Shaktipat technique does open the main energy channel or Sushumna but it only opens half way up to Heart Chakra level. It is very difficult to open the Sushumna above the heart chakra due to dense negative energy blockage resulted from many past lives trauma accumulating specifically in that part of the Sushumna. See the picture below of 'Ordinary Shaktipat Through Sushumna'. As a results, even though the Kundalini energy is successfully released through the Sushumna, it will stop at the heart chakra level and create energy pressure for the upper part of the body. 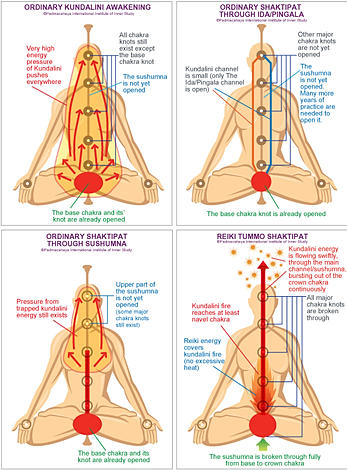 None of these problems will happen to a Reiki TUMMO™ practitioner. The Reiki TUMMO™ level one attunement prepares you properly for the Kundalini awakening by: